Jerusalem is a city rich in history, religion and heritage—all of which you’ll discover on this 4-night post-tour extension that will take you to some of the oldest and holiest sites in the world. From the fascinating Old City to the vibrant downtown, there’s no shortage of ways to uncover this city’s enthralling past and captivating present! 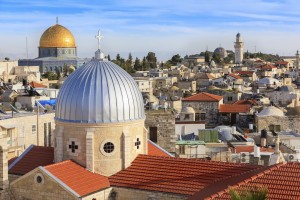 Package includes 4 nights at the Orient Jerusalem Hotel, Israel (or similar), daily breakfast, 3 days of excursions with over 15+ sites, services of a local host/guide, all transfers, transportation on tour, flight from Cairo to Jerusalem, and all service charges, taxes, and porterage.

Orient Jerusalem Hotel, Jerusalem, Israel | 4 Nights
The Orient Jerusalem hotel is nestled at the heart of the German Colony, walking distance from countless cultural, tourist, and historic attractions, and 2 miles from The Old City and the Western Wall. The 243 luxurious rooms showcase an eclectic design, merging classic motifs with modern innovations. Guests can unwind in the rooftop pool overlooking iconic landmarks, the onsite spa with gym, indoor pool, Turkish bath, and saunas.

Wednesday, October 13, 2021 | Jerusalem, Israel
Upon your arrival in Jerusalem, you’ll be greeted by a Uniworld representative, transferred to your hotel for check-in and have the rest of the day to explore at your leisure. As one of the oldest cities in the world, there’s plenty to experience—including the Mahane Yehuda Market and its more than 250 vendors. Please note: There will be a hospitality desk for guest questions at the hotel. During excursions, hosts will be able to assist guests.

Set out on a half-day tour of Jerusalem, starting with a visit to Yad Vashem. Established in 1953, Yad Vashem is the global center for documentation, research, education and remembrance of the Holocaust. Located on the Hill of Remembrance, you’ll also tour the Children’s Memorial. Pay a visit to the Israel Museum, the country’s largest museum and a leading cultural institution. You’ll visit the Shrine of the Book, home of the Dead Sea Scrolls—ancient religious writings that were originally found in caves along the shores of the Dead Sea. On your way back to the hotel, you’ll pass by Israel’s Parliament House and Supreme Court building and then have the afternoon to explore at your leisure. Your local host will be delighted to provide you with suggestions on the best places to dine and other ways to experience the city like a local.

You’ll begin today’s full-day city tour by entering the Old City of Jerusalem through the Lion’s Gate—which marks the start of Jesus’ trek from his condemnation to crucifixion. As you venture into the Muslim Quarter, you’ll visit the Pool of Bethesda, and head toward Via Dolorosa, believed to be Jesus’ route to the spot where he was crucified. Make sure to take in fantastic views of the city from the Temple Mount, where King David captured Jerusalem as well as the spot that would house the Ark of the Covenant.

A visit to what is largely considered the world’s holiest Christian site—the Church of the Holy Sepulchre—is up next. The extraordinary church stands on the site where Jesus was crucified and buried. This afternoon, drive to neighboring Bethlehem, Kind David’s hometown and Jesus’ birthplace. Since we’ll be crossing over into Palestinian Authority, you’ll be guided by a local Palestinian through Manger Square and the Church of the Nativity. Later, you’ll enter the serene site of the Garden Tomb. This rock-cut tomb and holy site is said to be the place where Jesus was buried and later resurrected.

Start your last full day in Jerusalem atop the Mount of Olives for a tremendous view of the city. Since ancient times, the Mount of Olives has acted as one of the main burial grounds in Jerusalem for all three monotheistic religions. The foot of the Mount of Olives is said to be the location where Jesus prayed following the Last Supper. You’ll then embark on a drive through Kidron Valley to Mount Zion, where you’ll see the sites of the Last Supper and King David’s tomb before entering the Old City through the Zion Gate. One of the holiest sites in Judaism, the Western Wall, beckons here. Visitors will notice that many of the cracks between the blocks are filled with prayers written on paper. The final stop is the Davidson Center and Jerusalem Archaeological Park, which showcases more than 2,000 years of the country’s history.

After a delightful breakfast, you’ll check out of your hotel and will be transferred to the airport for your flight home.

Would you like to stay up to date on our CME/CE Cruise
& Travel Seminars including exclusive PES amenities
and new trip announcements?